The US Patent Office has approved Transformix’s second round of patent claims on the technology that makes CNCAssembly®  possible. To date, Transformix has patents covering more than 70 claims, of which over 90% have been judged as meeting the highest patent classification of Novelty. 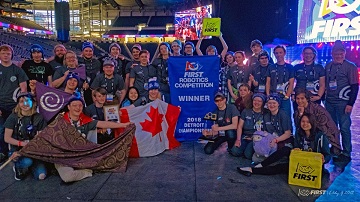 The Lake Effect Robotics team, made up of 30 Kingston-area high school kids, competed against 91,000 students on more than 3,500 teams from 27 countries during the 2018 season. They won their district championship and a spot at the FIRST Robotics world championships in Detroit. Their strong play and solid results throughout the competition made them an easy selection to the alliance team that eventually went on to win the final match. FIRST (For the Inspiration and Recognition of Science and Technology) engages with youth around the world to help them become innovators in science, engineering, and technology. It makes science cool! Transformix is extremely proud to play a small part in making this program possible in Kingston.

For almost ten years now, Transformix has proudly sponsored Kingston's two FIRST Robotics teams. We are happy to announce that both the Lake Effect Robotics team and the W.A.F.F.L.E.S. team have successfully competed at their district events and have qualified for the World Championships in Detroit. Congratulations to the kids for all their hard work and to the mentors that make this awesome program possible. Click here to see the newspaper coverage.

August 2016: Transformix and CNCAssembly® Featured in Business in Focus Magazine

"Transformix’s highly flexible, repeatable and precise technology is the first of its kind in the world. The company has developed a disruptive, game-changing technology that allows its clients to achieve productivity and efficiency like never before." Click to read more

The federal government, through its Canadian Intellectual Property Office, has approved the registration of “CNCAssembly®” and “RSM Technology®” as the official Registered Trademarks of Transformix.

February 2016: How It's Made TV show highlights Transformix's CNCAssembly® Technology

Typically the show focuses is on the process of manufacturing the “widgets” such as chewing gum, golf balls and other items found around your house. Documenting an assembly machine and the technologies that are used to manufacture “widgets” is a first for “How It’s Made” the show. It was a challenging task for the “How It’s Made” team to tell the story of such a state-of-the-art technology, considering the ages of the show’s audience range from 5 to 95 and the story had to be told in less than 6 minutes. It took them 2 days to shoot the video footage and countless hours of writing and rewriting to simplify the script. Click to watch

Singapore has become the second country to issue a patent to Transformix for its CNCAssembly® Technology. Canada granted Transformix a corresponding patent last month.

To date, Transformix has filed three different patent applications related to its CNCAssembly® Technology under the Patent Cooperation Treaty (PCT). These applications cover more than 70 claims. The patents issued by Singapore and Canada pertain to the first of these applications.

Canada has become the first country to issue a patent to Transformix for its CNCAssembly® Technology. Other countries are expected to follow suit.

The patent in question was filed under the Patent Cooperation Treaty (PCT) on November 17, 2013 and covers 42 claims, all of which were determined in the written opinion of the International Searching Authority to meet the criteria of Novelty, Inventive Step, and Industrial Applicability. This clear and unequivocal opinion is expected to result in the streamlined issuance of patents by individual countries and Europe.

To date, Transformix has filed three different PCT patent applications related to its CNCAssembly® Technology, covering more than 70 claims, 95% of which have been judged as meeting the test of Novelty. The patent just issued by Canada pertains to the first of these applications.

Rockwell Automation has published a "Solutions in Action" article about CNCAssembly®, a piece that will be posted on Rockwell's web site and shared with their clients. Article... 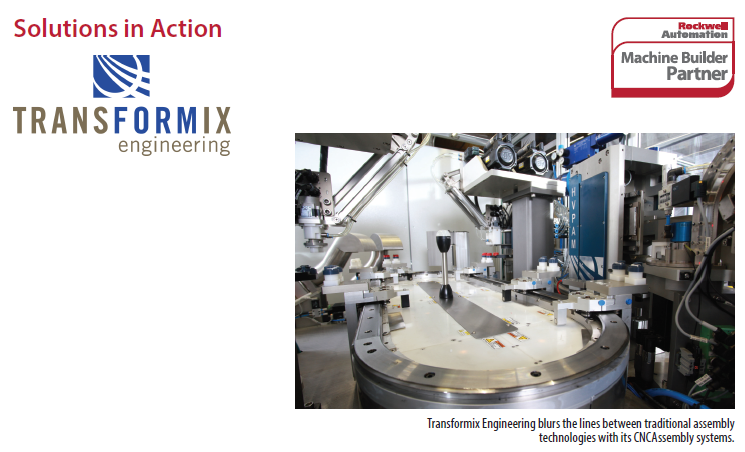 Peng-Sang Cau, CEO of Transformix, will be the opening speaker at the 9th annual State of the Island Economic Summit on October 28 and 29. The conference is hosted by the Vancouver Island Economic Alliance. More

December 2014: "How It's Made" production crew completes filming of CNC Assembly® for broadcast on The Discovery Channel

Due to the game-changing advancements that CNCAssembly® technology is bringing to the world of assembly automation, the producers and technical advisors from "How It's Made" approached Transformix to document the revolutionary technology.

The production crew from "How It's Made" just wrapped up two days of shooting at Transformix and the featured episode will be ready to air in mid to late 2015. We'll keep you posted on the show times when they become available.

Peng-Sang Cau, CEO of Transformix, accompanied Canadian Prime Minister Stephen Harper on his recent trade mission to China. This was the second foreign trade mission this year that Peng attended as part of the Prime Minister's delegation, the first taking place in The Netherlands in March. 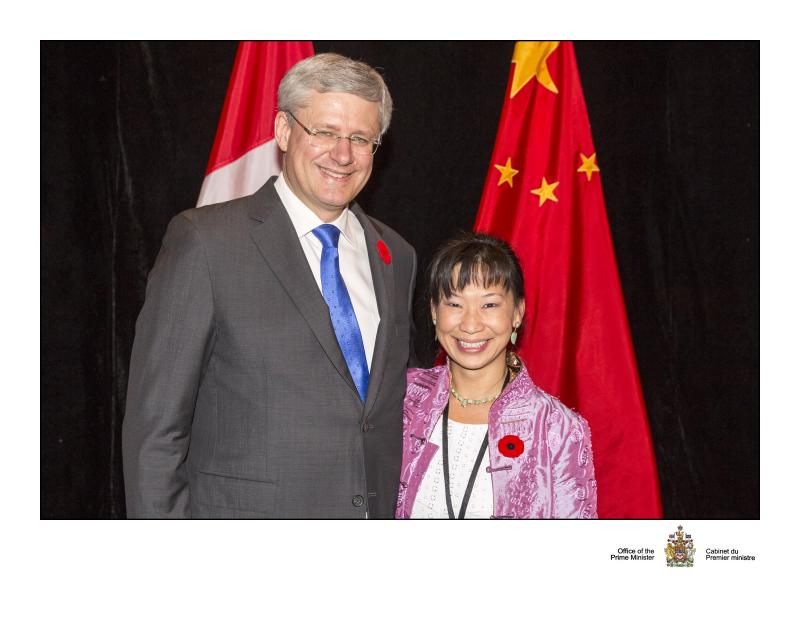 October 2014: Transformix CEO profiled in The Globe and Mail

Peng-Sang Cau, CEO of Transformix, is profiled in The Globe and Mail, one of Canada's top newspapers. The article covers Ms. Cau's extraordinary personal story, tracing her journey from Cambodian refugee to the entrepreneurial head of one of Canada's most innovative companies. It also presents Peng's views on the importance of manufacturing to a country's overall economic health.

September 2014: Transformix to expand its operations at its Gardiners Road facility

Transformix is pleased to announce that its CNCAssembly® Technology is gaining tremendous traction in its US and European markets. As a result, the company is expanding its manufacturing and consolidating all operations to its Plant 2 location at 1150 Gardiners Road in Kingston. Media Release can be found here.

September 2014: Transformix CEO to be the keynote speaker at trade policy conference

Peng-Sang Cau, CEO of Transformix, will be the keynote speaker at the Sixth Annual Queen's Institute on Trade Policy on October 27, 2014.

The Queen's Institute on Trade Policy is a 4-day course intended for mid-level government officials who already have some experience with the basics of trade policy and negotiations. Its purpose is to help a new generation of federal, provincial and territorial trade policy practitioners to acquire the skills and perspectives needed to develop trade negotiation strategies.

August 2014: CNC Assembly® to be featured on The Discovery Channel show, "How It's Made"

"How It's Made," The Discovery Channel's long-running and highly popular television show, plans to highlight Transformix's CNCAssembly® technology in a future episode. Production is scheduled to start in late November 2014.

As you can imagine, "How It's Made" is a big favorite among Transformix's engineers and technical staff, so we're thrilled and honored by the show's interest in CNCAssembly®. We'll keep you posted of more details as they become available!

August 2014: Transformix Vice President to be a featured speaker at The Assembly Show

Larry Allingham, Vice President of Operations at Transformix, will be a featured speaker at The Assembly Show, North America's principal annual exhibition of assembly technology.

Larry's presentation, entitled "CNC Assembly®: A Unique Combination of Speed and Flexibility," is scheduled for October 29, 2014 at 2:00 PM.

The Assembly Show takes place in Rosemont, Illinois from October 28-30, 2014. More information can be found here.

June 2014: Medical Design Briefs magazine selects CNCAssembly® as a finalist for 2014 Product of the Year

CNCAssembly® technology has been selected by Medical Design Briefs magazine as a finalist for its 2014 Product of the Year, citing "its outstanding technical merit and practical value to the magazine's 40,000 engineering and scientific readers." 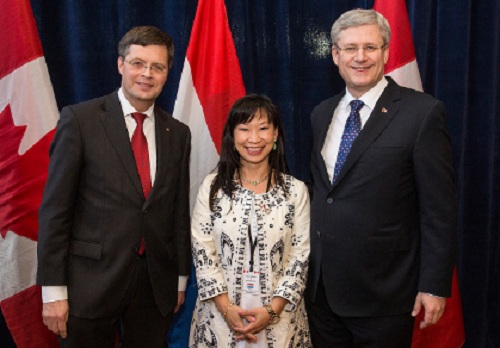 Peng-Sang Cau, the President and CEO of Transformix, was honored to be part of a delegation of Canadian business leaders selected by Prime Minister Stephen Harper to accompany him on his recent trade mission to The Netherlands.

Transformix is intensively developing business in Europe, so this trade mission was an outstanding opportunity for Ms. Cau to make contacts and build relations with Dutch business executives.

February 2014: Medical Design Briefs magazine selects CNCAssembly® as its product of the month

CNCAssembly® technology has been selected by Medical Design Briefs magazine as its product of the month for February and is now in the running for Product of the year.

...CNCAssembly® responds to manufacturers’ need to get more productivity and versatility from their production equipment.  ...Just like CNC machining centers, CNCAssembly® machines are general-purpose tools that can be configured and programmed to run a wide range of products.  To view article please Click Here. 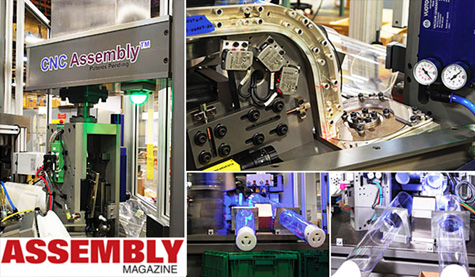 When Transformix was asked to design a standard, cam-driven continuous motion assembly system for a consumer product, the company’s engineers questioned some basic assumptions about the technology:

Their answers to these questions led to CNCAssembly®, a new automated assembly platform that combines the speed of continuous motion assembly systems with the flexibility of robots.

“Manufacturing plants demand greater output per unit of time and space,” says Ken Nicholson, director of technology at Transformix. “These objectives have been tough to achieve with assembly machines since they are typically customized to specific products. This means companies usually have relatively low speed, specialized machines spread across their factories, consuming a lot of expensive floor space.

“If they do install high-speed machines, they are invariably for high-volume, long-running products, since high rates have always been incompatible with flexibility and adaptability. Our goal in developing CNCAssembly® was to give manufacturers a standard machine that could run at high rates—200 to 600 parts per minute—but that also had the quick-change versatility to run a range of different products.”

Peng-Sang Cau, President and CEO of Transformix, speaks at the Diversity Works Symposium in Kingston, Ontario, discussing her experience as a Canadian immigrant and entrepreneur.

Kathleen Wynne, the Premier of the Canadian province of Ontario, visited Transformix and received a first-hand view of the company's new CNCAssembly® technology. Video... 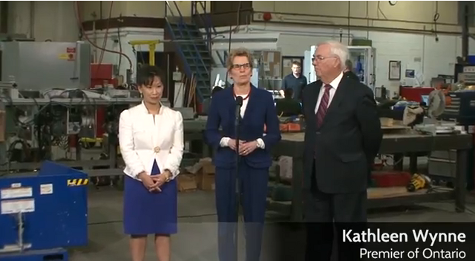 Marc Garneau, the first Canadian astronaut in outer space and current candidate for the leadership of the Liberal Party, visits Transformix. 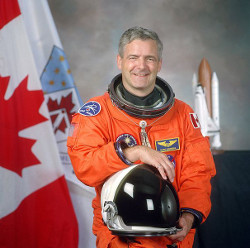 When the four founders of Transformix Engineering Inc. decided to make Kingston its headquarters, it wasn’t because they called the city home for four years while studying at Queen’s University.Article...

November 2012: Transformix's CEO Honoured as a Leading Woman in Business

Growing up in Regina, Peng-Sang Cau listened to stories her parents, Tan Shu Tien and Mea Nee Cau told her and her siblings of their life in Cambodia, Where they started and built a thriving bicycle manufacturing business. Article...

Continuous Motion, the art of assembling parts without stopping on a rotating dial machine, has traditionally been limited to 1) the ability to introduce parts into a dial at a speed that allows for a smooth part transfer, and 2) room for the assembly tooling. Article...

Peng-Sang Cau, Ken Nicholson, Martin Smith, and Richard Zakrzewski are recognized in the Queen's University Alumni Review for their entrepreneurial success with Transformix.